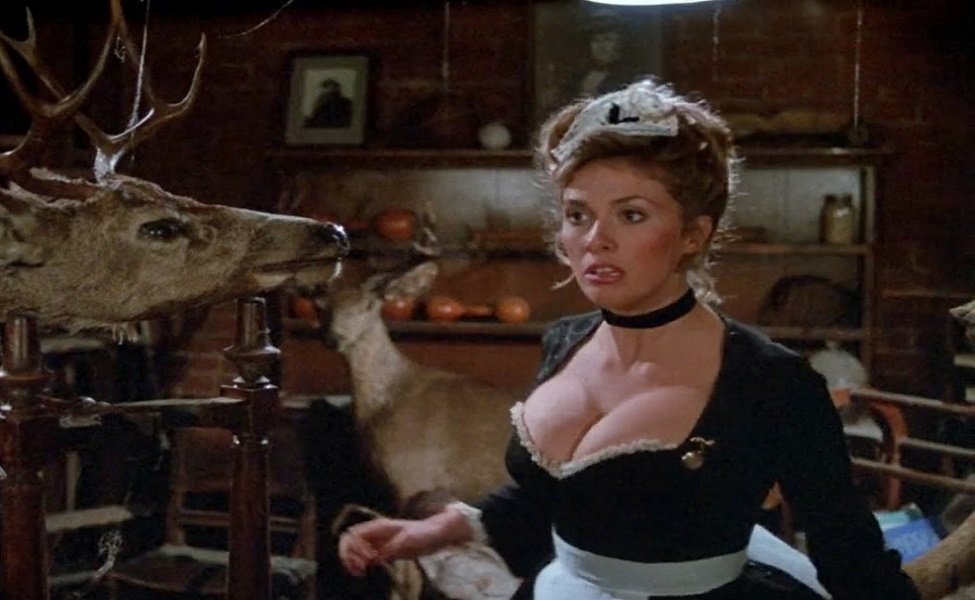 Yvette is a rather unique character in the movie. She connects most of the guests through the grand conspiracy of being Ms. Scarlet’s top “call girl” at her business connecting her to Col. Mustard and Mrs. White. Ms. Scarlet also expands the web in her ending to include both Mrs. Peacock and Prof. Plum for some reason. And to top it all off, she is the only character that ends up being both murderer and murder victim, if you go by the first and only physically possible ending, that is.

I also like the fact that she is not only the chichéd “French Maid” at the mansion, but that she’s literally playing the part of the french maid. In the scene where she meets her killer in the billiard room, as the two converse, you can hear that she drops her over-the-top french accent. It’s a subtle reveal that she’s not really the maid, but a call girl putting on the french maid persona for the benefit of her clientelle.

But there’s one thing about her that makes her the most unique character in the movie for me.

She’s the only murder victim that survived the night.

Now now, calm down. This isn’t canon or some sort of reveal that was cut from the movie. It’s just her manner of death is… problematic.

How does Yvette get killed? We see her getting throttled with the rope. She isn’t hung, there’s no long drop with a sudden stop, no neck breaking to be found, just the strength of one person on the rope.

Granted, if given enough time, this could be fatal.

But there simply isn’t.

For the first ending where Ms. Scarlet is the one to strangle here, she has 2 other murders to commit in that same period when the lights are out. She would barely have time to get her to collapse on the pool table before having to book it to the library to kill the cop and not even be able to double check on her before having to shoot the singing telegram. In the second ending, we get the same problem; this time Mrs. Peacock is the one that has 3 murders to commit during lights out.

In the third ending, Mrs. White may have more time to strangle Yvette given that she doesn’t have to run off to commit more murders, but she DOES have to run off to get back upstairs to scream at the surprise jack-in-the-box popping up in her face after the gunshot.

So, why did Yvette go along with it? By the sound of things she’d gotten choked harder by her Johns than any of her possible killers could manage in a few minutes. Why not fight back or pop right back up when her killer left the room?

For me, it can only be that Yvette decided to ham up her strangulation to then played possum for the rest of the evening. It worked out well for her, as immediately after the 3 murders, Wadsworth starts solving them. Might as well lay low and see if he gets it right.

Aaaaand another possibility is that she might have lost consiousness from the choking and she just hadn’t come to yet.

So that’s my theory on Yvette: the call girl specializing in the “French Maid” schtick who was really an intelligence gathering agent but certainly lived to tell the tale.