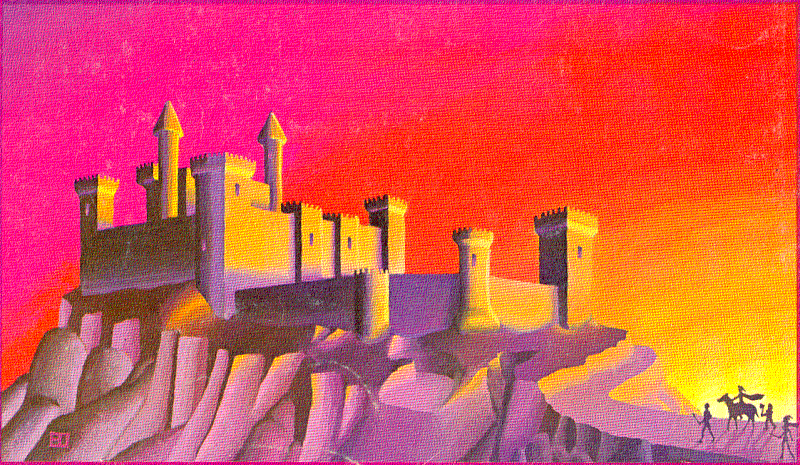 So, when I played D&D as a kid, one of the modules we had which we played thru about a dozen different times was “Keep on the Borderlands”. Although, the Keep itself was just a “home base” of sorts, where the real stuff went down was the Caves of Chaos™

Pretty much every evil creature from D&D you could ever hope to find (save for, ironically, a dragon) is holed up somewhere in this labyrinthine mess of caves. It had kobolds, orcs, goblins, bugbears, a medusa, an owl-bear, an ogre, evil cultists, and even a Minotaur.

But even with all that stuff, usually your players would outgrow the module and have to move on after they got to about 6th level. So a while back I thought about updating it for use in 5th edition, possibly for a campaign I would run, seeing as my current group is on extended hiatus. Then I remembered how I had come up with a huge rewrite/overlay to the module that really spiced it up.

As the situation stands in the original module is this: there are borderlands, there is a keep there. This keep is a staging point for taming these lands that border civilized realms. They are perfect for young and budding adventurers to prove their worth by venturing out to the wilds and clearing out the horrors that lie there. The most prominent den of such horrors being the nearby caves of chaos.

What this would add is some extra layers of shady dealings, motives, hidden treasures to the module, so instead of the module being all used up and pointless once you get to about level 6 or so, you can keep (heh, get it?) the module as an interesting location well into the campaign.

So, before there was a keep. these wild lands were home to the cult of chaos, among them the man who would eventually become the Castilian. Being a faithful servant of the cult, he earned the reward of drawing from the Deck of Many Things: A rare treasure the Cult had acquired.

Among his draws were Throne (gaining the keep itself), Knight (gaining his captain of the guard), Rogue (gaining the enmity of the current high priest of the temple) & Vizier, but lastly was Balance: turning him Lawful Neutral.

This last card changed his ways to reject chaos and begin his campaign to bring order to the borderlands. Thus, upon claiming his keep, he immediately swore allegiance to the nearby realm and called all willing to join his forces to eradicate the cult living in the caves of chaos.

He was well aware how much of a threat of chaos and destruction the Deck still posed, he longed to destroy it. But with the chance that outright destroying the deck would reverse its effects and leave him without his gains, he instead sought a means to disable it. So, using his answer from the Vizier card, he learned how he could break apart the deck so that it would not function. With that, he managed to steal a number of cards from the deck and hide them in different locations in and around the keep.

Rendering their prized possesion inert, this enraged the cult against him. His newly-turned adversary, the cult leader, sought to make the deck complete again. But also, to have his revenge on the former cultist for abandoning his principals. He decided upon an elaborate plan to bring down the Castilian.

With the Castilian allied with the nearby realms sworn to purge the borderlands, shipments of supplies begin to flow to the keep. The temple began intercepting shipments of arms and armor to the keep and adding their own evil enchantments to them before quietly replacing them into following shipments. These cursed items look identical to normal ones save for a secret mark. The cult leader holds the key to activating the curses and turning the bearers of the cursed items against the keep.

The priest at the keep is an agent of the cult, spying to know when enough guards and man-at-arms are using these cursed items.

Permanent enchantments on the cursed items:

The cursed items, once activated, will randomly have one of the following enchantments that will trigger during combat once every 1d4 rounds:

Among the cursed items, the Cult leader has a special set of armor just for the Castillian. Among a random enchantment from the list above, it also will cause an alignment shift back to chaotic evil, and the wearer’s movements can be controlled thru the high priest.