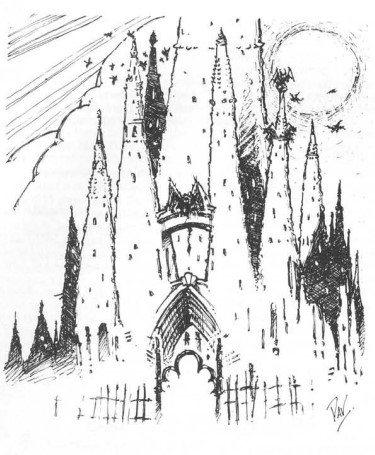 Alarius gives him a disarming smile. “I am tempted to tell you to relax, that I’ll be with you the whole way, that it’s actually a calming experience, but we both know people can take the same stimuli very differently. Which, I suppose is why we are doing this at all, isn’t it?”

“Just promise me again I won’t go falling thru the floor to my doom.” Galen tries to say in a jovial way.

Alarius gives him a moment to make sure, then begins the incantation. As he speaks and jesters, Galen feels a ripple wash over him as his vision seems to cloud. He sees the color drain from the world about him, sounds get muffled and indistinct. Even Alarius’ voice sounds as if under a blanket despite being right at his side. He reflexively tries to close his nose and mouth and exhale in an attempt to clear his ears.

He looks about him as the spell completes: the walls of the room they were in but a faint, desaturated and transparent outline nearby and his vision overcome with a gray haze the further away as he casts his eyes around.

“Welcome to the Border Ethereal” Alarius says; his words echoing in the immense distance of the whole yard between them.

Galen walked around the room, marveling at the insubstantiality of it all. He couldn’t help but give a slight chuckle as he swept his arm harmlessly though a pile of books and an ink well sitting on a nearby end table. Testing further, he went up to a bookcase and was able to step into its form, at once feeling no resistance, but at the same time a sort of …temperature change would be the wrong phrase. Almost as if he had managed to poke a soap bubble with his finger, yet the bubble remained intact. Almost a sense of surface tension lingering on the parts of his body where he was not fully engulfed by the books and wood of the shelves.

He looked over to see Alarius with an easy smile watching him explore the environment as a toddler would a snowy field or glittering beach for their first time. But he could see something behind that smile, a lingering tension just now released.

“Master Alarius? Is something the matter?”

Alarius allowed himself a heavy sigh and looked about as he spoke.

“I must confess I am relieved. I was afraid to return here, at first. Deciding on the Ethereal plane as your first destination beyond this plane was a test of us both.”

Galen’s mouth dropped open “Master, I am so sorry, I didn’t realize it-“

“There is no need to apologize my good lad. I’m glad it worked out this way. You see, I was trapped here for centuries, but fortunately it was in a rather fragmented state.”

The two of them begin to walk as he continues his tale.

“My body was encased in a crystal here whilst much of my life force was tied to the shards that made up the prism at the heart of the keep. I was but dimly aware of anything, and that awareness split between the crystal shards and here. Knowing now how long I had been in that condition, not having full consciousness was probably what saved my sanity.”

He turns to his apprentice and takes him by the shoulders to face him.

“Thank you. I know it might seem odd considering your worries of venturing here, but I believe we’ve both found strength in each other to make this journey.”

Galen blinks at the gratitude Alarius gives him, feeling it a bit unearned. “I don’t know what to say. I know you said that of all the different planes in existence, this would be the safest, but I guess you meant for me. I never knew it might pose a danger to *you*, master.”

“The danger was only to my comfort, my dear boy. I feared that having spent eons imprisoned here, I might have— let’s call it an ‘adverse reaction’ to seeing this place once more. Thankfully, we are both here to lend each other support.”

There is a moment of quiet as they walk in silence together for a while.

Finally, Galen turns to ask “how long does the spell last again?”

“Roughly a day of sunlight, so about 7 more hours I should guess. Are you ready to return already?”

“Oh not at all!” Galen hastily answers, looking about. “I just wanted to make sure I don’t get stuck in a wall anytime soon.” With that, he runs up and leaps though a nearby wall with a laugh.