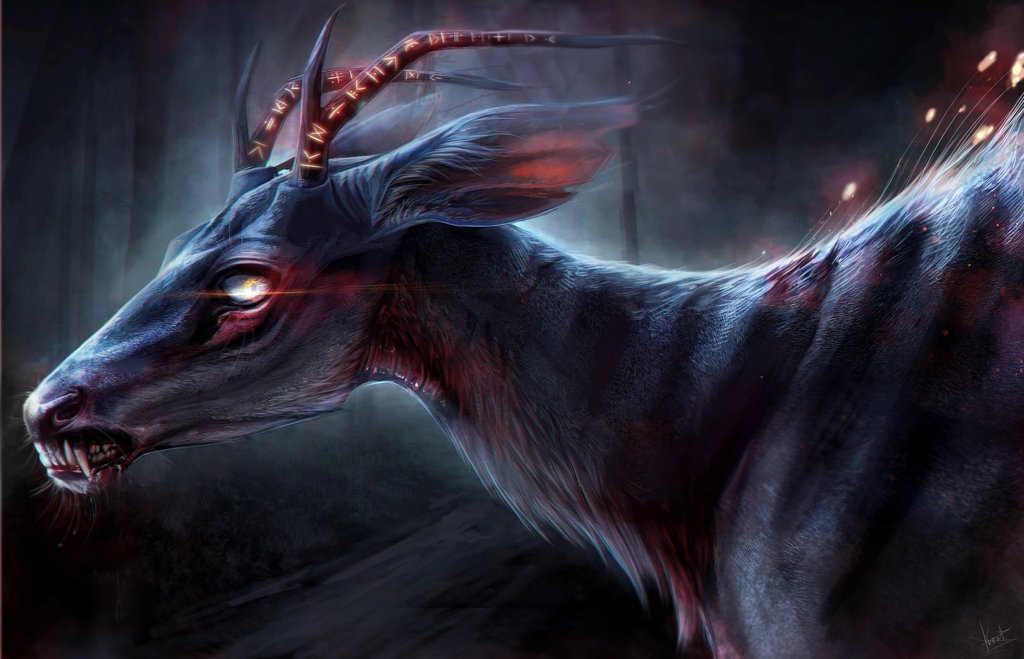 As the afternoon hours wind toward evening, Merrick takes up a perch near a familiar watering hole. There is still plenty of light for hunting, but he is not kitted out for such a pastime. Were anyone there to witness it, they would find him decked in his armor, shield at the ready beside him as he readies his bow.

He scans the scant visitors of the watering hole and finds an old buck, smaller than what would be worth putting on the table for a meal, but that is not his intention on this outing.

He then dons an uncharacteristically thick gauntlet before unfolding a small parcel before him: 4 arrows, blacker than midnight and practically sizzling with a deep violet energy.

Keeping a keen watch on his target, he steadies himself with a deep breath – pausing for a moment before selecting one of the arrows before him; Arrows that he would guess had not been set to flight in millennia since he had gathered them from the mountainside where they met that enormous skeleton.

He winces slightly as he feels the necrotic energy try to sap his life even through the thick glove. He’ll have to make this quick, but not rushed.

The old buck unwittingly cooperates with Merrick’s plan as he turns at a slight distraction, presenting a perfect angle for him to fell it in a single well-placed shot. With practiced skill, Merrick lines up his shot and let’s fly just as he starts to feel his fingers begin to go numb under the arrow’s enchantment.

The shot lands true, felling the deer right through the heart.

Merrick gives a small whisper of thanks that the animal felt nothing in its final moments. He folds up his parcel and lays down his bow, keeping his eyes on the deer as his hands sightlessly find his shield.

His attention is suddenly ripped away from his quarry as some distance behind him the sound of movement thru the underbrush meets his ears. He whips around, trying to find its source as he mumbles curses to himself for not making sure he had not been followed. The goblins were a lively and playful bunch, but tend toward mischief making and that was the last thing he needed.

Finding no further disturbance behind him, Merrick turns back to the watering hole – too late to have witnessed the gruesome transformation.

The buck was on its feet.

Merrick couldn’t help but marvel at the speed of which this target had gone from a gaunt but still very much alive and whole deer to the skeletal form it was now: some bits of grizzled flesh and patches of hide still clung to the now mostly bone frame.

As its head turns, Merricks eyes are met with now empty sockets – burning pinpricks of fiery red light at their center as it takes notice of him even over the near 80 feet of distance between them.

Without a moment’s hesitation, it launches itself toward him without heed to any obstacle, letting loose a sickening screech.

The immediate lunge at him takes Merrick aback, the amount of distance between them giving him just enough time to raise up his shield. Unfortunately, his hand still a touch numbed from the arrow fumbles as he tries to grasp the handle of the warhammer at his belt and the weapon slips from his grasp.

Merrick abandons the hammer for the moment and braces himself for the collision, which the buck makes with a fury Merrick’s not used to seeing in the undead. It seems to have a singular purpose is its present state: to end him specifically.

Merrick is able to not only brace for the blow, but manages to turn the creature off its center, forcing it far past target galloping past him. It wastes no time circling round to charge again, but it is enough for Merrick to find his hammer in the underbrush.

The second charge is met much like the first, and with unnatural determination. Almost as if Merrick had goaded it on to single him out as a target to the exclusion of all else. This charge, however, would be its last as Merrick turns the creature with his shield to meet its flank with a crushing hammer blow.

Merrick stands over the broken form of what was once a living deer, and then once an undead one. After catching his breath, he inspects what is left of the creature and discovers the arrow; seemingly untouched by all the violence visited upon its host. Catching himself in mid-action, he remembers to fish out the gauntlet from his belt and put it on before handling the foul thing.

As he begins to make his way back toward home, he cannot help but wonder ‘To what good are these arrows? Upon slaying a living creature, the resulting undead is one that immediately targets *you*! Who in the thick of battle would want *that*?!’

Merrick paused on his walk. He was falling into *his* way of thinking, not taking into account the mind of those that would craft such an evil weapon. He put his new talent for tactics and strategy to the task.

‘Hang on, put aside your method of battle and instead think how a more unseemly sort would wage war. Certainly any sort that would craft such a horrible projectile had not done so without good reason. In fact, it would take a deep understanding of the necromantic arts to be able to even wield such foul things, let alone craft them. Anyone that can go so far as create undead must at some earlier stage learned to control the undead.’

Merrick glanced back at the clearing he had come from and down at the wrapped bundle of arrows, slightly frowning:

‘Well, it looks like these arrows are only a step in the technique. They only create the undead, from fallen foes, no less, but do not grant the archer any control over it, it would seem.’