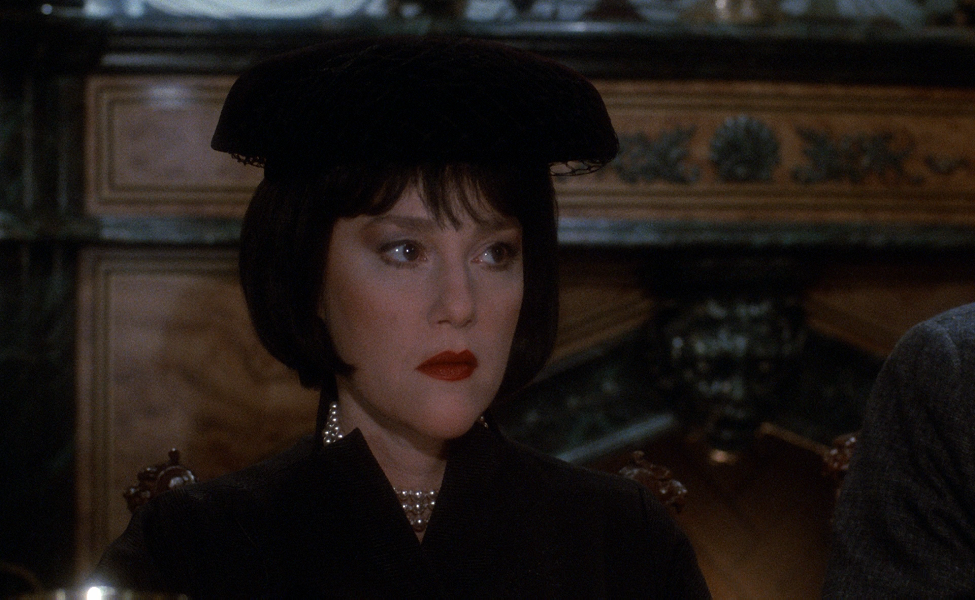 These remaining character studies I fear will be much shorter than the first few so far. And that’s not to say because these characters aren’t interesting; it’s that I’ve covered a lot of my plot holes and logical issues I’ve had with them already. I’m sure it would be tedious for me to just keep on repeating my same objections over and over again.

With Mrs. White, I’ve already gone over how implausible it is for her to have committed the one murder to her credit (Yvette). Not to say I didn’t find the reveal and her confession one of the funniest things in the entire world.

But I will still gush about what Madeline Kahn did with this role. Thanks to her, this character was never in danger of being the one-dimensional cut-out it might’ve been. She was given “Jilted Wife” and took it on a friggin’ joy ride.

My favorite scene with her is when Col. Mustard starts in on her after they find the cook dead, where we get this exchange:

To be honest, though, there’s one thing nagging me about her backstory.

Her reason for being blackmailed still confuses me.

It is because her husband was killed rather brutally, aaaaaaaand that’s it.

It is literally left at that.

I can come up with a load of different ways someone *might* be blackmailed over that. She claims it is to avoid a scandal. It cannot be to keep secret the fact that he died at all, I would imagine *that* would be public knowledge. So, is it the grizzly details that are not publicly known? That seems to be what we are meant to conclude given what Mrs. White tells everyone.

I don’t know, maybe Tiger King has ruined me on thinking that every sordid detail of somebody’s death wouldn’t be immediately blasted to all corners of the globe by the media. So I just can’t accept that as the reason. Maybe it’s been ruled an accidental death in the press or something to that effect? Would that be enough to pay blackmail over?

Maybe the police never stated that his death was a homicide or it’s still an open investigation and they haven’t got enough (yet) to charge anyone? I do find it funny that nobody outright says he was murdered (even though he was “found dead” with both his head cut off and his… you know).

It’s all plausible, so take your pick, I guess.

I find it interesting that in the “real” ending, Wadsworth describes how she (impossibly) murdered Yvette, he says “You *were* jealous your husband was schtupping Yvette, that’s why you killed *him* too!”

But even then, Mrs. White only confesses to killing Yvette, NOT her husband. She instead answers with “Yes, yes I did it. I killed Yvette. I hated her… SO… MUCH…”

So, that leaves me with an interesting thought experiment: what if she really didn’t kill her husband?

I kinda like this idea, because that not only breaks the trope, and what we are all lead to assume when we learn about it in the study (especially with the weak-sauce alibi of being out all evening at the movies), but it opens the door to who could’ve killed him. Suddenly, a nuclear physicist having an affair with an espionage asset who also has her hooks in a Colonel at the pentagon doesn’t sound like a red herring after all!