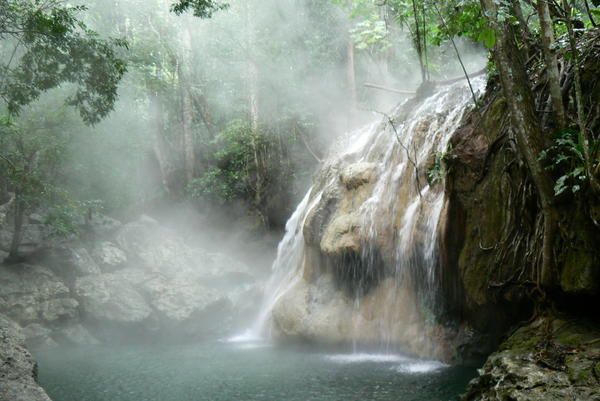 Merrick wordlessly snaps the reigns, bringing Bucky and the cart to a stop near the water’s edge. With a sigh, he lifts himself off, landing with a squishy thud next to his horse, patting it on it’s neck without looking up. He ambles to a small clearing near the pool and begins unbuckling his armor and equipment; spreading out each item as he goes.

His movements are slow, but not all that careful. As the last of the armor is peeled off, he strains to remove the ale-soaked garments underneath that still cling to him like bar rags. With a muffled slop, he leaves them in a pile, absentmindedly snagging a pack by one strap and listlessly striding to the spring.

His features betray signs of life as he winces at the heat of the water on his toe, but it quickly fades as he continues in, dropping the bag dangerously close to the edge without a second glance. He wades completely in, immersing himself in the steaming vapor; the smell of stale beer evaporating in the heat. Finally, he plunges his head under the surface.

For a moment, nothing happens. And after a few moments, nothing continues to happen.

Then, a single, large bubble breaks the surface with an almost comical gurgle before Merrick’s soaked locks follow.

His form remains motionless in the center of the pool for a long while as he lets the water do its work. Eventually, he sinks down again, wading to the edge near his pack as he turns to rest his shoulders on the stone lip, letting out a groan that under different circumstances would’ve been considered over-exaggerated.

His gaze is unblinking, straight ahead; not even a glance in the direction of what he knows to be the Naiad as she peeks up just above the water’s surface on the far side of the pool; giving the familiar but long-absent human form a curious look.

Not bothering with any pleasantries, Merrick throws a question aloud: “Are we all destined to be monsters in the end?”

Before an answer comes, he hastily adds: “Not you, my apologies. I meant we mortal beings, we men, elves, dwarves– is there no end to this cycle? Do we just keep quarreling over what amounts to trinkets?”

He lets his neck go limp as his head comes to rest on the mound of earth behind him as his gaze finds itself pointing at the stars starting to emerge from the deepening twilight. Another exasperated sigh escapes his throat.

“Another group came from that bandit hole we cleared but a scant few months ago. The first were sowing chaos as an end unto itself, while making a go at what treasures there were in the town was but a bonus. But this second group… they came for the treasure and the chaos was merely a tool to that end.”

“is this just what we mortals DO?! Are we cursed to gather hoards of treasures, build kingdoms, empires, only to have them crumble and rot to serve as bait for those that come centuries later to pillage?”

At last, he chuckles a bit “You can guess why I am not seeking an audience with Copper for my current troubles.”

The Naiad’s form slowly approaches the babbling mortal, still pondering him with a mix of curiosity and pity. Merrick finally stops avoiding her gaze and looks down from the night sky to meet her eyes.

“We’ve come out here to find wilds and wilderness and managed to build a town. We’ve explored, gathered plunder, salvaged shipwrecks, ransacked tombs, raided a bloody trainload of gold from fey creatures, enough to fill three vaults. Each time, there were those that stood in our way. And now it looks as if, in days not so far off, it will be WE who set the traps, call the guards, cast the spells and summon the creatures to stand in the way of others.”

“How different are we?”

The naiad suddenly starts to laugh. It is not cruel, nor is it innocent, but a laugh that one would hear from a wisened soul who heard an old tale from a toddler that thought it were brand new. Her form approaches the distressed knight.

“You are wrong to limit your dire predictions of fate to just you mortals. Many a fey, immortal, and the gods themselves suffer the cycle you describe. But the key difference, I see at least, between you and your company is the ‘why’. *Why* you gather and protect your treasures makes all the difference; to the hand of fate, the wheel of time, and the memory of you to those who follow after.”

“Those who proceeded you: those who built mighty and terrible fortresses and tombs, the ones whose treasures you have acquired, they did not seek to defend what YOU value most, which is life. They sought only to keep their gold and trinkets, as you say. THAT is why you, my dear, young foolish mortal, are not a monster.”