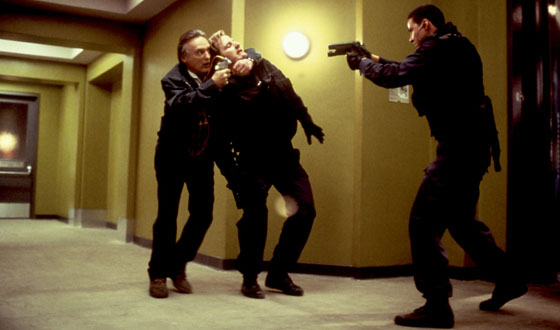 I read stonekettle station fairly regularly, and today he put up a piece he had on Facebook concerning mass shootings where he painted a scenario of what a mass shooting would look like if we took some people’s advice of arming everybody all the time (this time, on military campuses). You can read it here at this link http://www.stonekettle.com/2014/04/bang-bang-crazy-part-9.html

This got me thinking of one time when I was on some sort of chat online and the latest school shooting had spurred similar calls to arm all teachers in all schools all the time. I remember that the scenario I painted for them then to counter that idea bears a striking resemblance to Jim’s scenario linked above, but I gave the other person a few major concessions to boot.

The scenario: You are a school teacher and have been issued a firearm, along with all the rest of the teachers in your school. You, along with everyone else, have also received weapons training and, just to be thorough, complete psychiatric evaluations. Now, today you hear gunfire coming from the other side of the building. Before we begin, here are the ridiculously generous concessions I give the teacher:

1. You are a perfect shot – you never miss, you hit anything you aim at.

2. You are a perfect evader – you will always dodge any bullet aimed at you. Anything you use for cover or concealment will always function flawlessly for you. You cannot be shot.

3. You are a perfect perceiver – you see and hear everything around you with perfect clarity: no distortion, no mistaking one thing or sound for another. If someone has a gun in their hand, you know it isn’t a wallet or cellphone or stapler, if someone fires a shot, you know it wasn’t a firecracker or a car backfiring or the TV being too loud. You cannot be fooled.

You’d think that with all these superpowers, you could handle anything, right? Well here comes the rest of the scenario.

Once you hear the gunfire (and thanks to #3, you KNOW it is gunfire) you grab your handy-dandy firearm and head out the classroom door and down the hall. Now, when I originally told this scenario to the person I was arguing against, I asked him at this point who he planned to shoot at once he reached the area.

Notice how I assumed in the phrasing of the question that he WAS going to shoot someone, it was just a question of whom? Notice that the way I phrased it eliminated the possibility of solving the problem ahead of him WITHOUT killing people? I’m glad you noticed, since HE sure as hell didn’t. He blew right past the loaded (get it? loaded?) question and answered “The person who doesn’t belong there” or something to that effect. He was perfectly accepting of the fact that he was going to shoot someone no matter what, he just needed to figure out WHO to shoot.

At first, I tossed in a close to the scenario of him shooting a janitor down in cold blood because the janitor was new to the school, his first day, so the hero-teacher didn’t recognize him. He didn’t like that. He thought it was too unrealistic. I mean, what are the chances of the cleaning staff hiring new people the same day as a shooting? Riiiiight, janitors are never new to a school and all teachers and staff are kept well-informed of any and all cleaning crew changes and additions, complete with their background checks and photographs. Sure. I guess 4 superpowers weren’t enough for this guy, he had to have perfect knowledge of any and all people coming and going into the school at all times as well.

I let it drop at the time, because we hadn’t even gotten to the main attraction, as it were. Now, thanks to his abilities enumerated in #4, he arrives on the scene without being noticed, and before him is the following: 2 teachers (teacher A and teacher B) shooting at a third(C) with a fourth teacher(D) lying dead inside a classroom doorway with a couple children also lying dead next to her.

So, what do you do? I’ll tell you what he did, he went through the process of shooting first at teacher C (because it was 2 against 1, so teachers A and B must be the good guys, right?) Then, he made some sort of half-assed attempt to yell at all of them to stop shooting, which I had them either ignore entirely or start firing at him instead, etc. etc.

He never got to hear or figure out who the bad guy was before ending the conversation. I found this amusing, considering all the superpowers I gave him. He never found out that teacher D was the shooter, and was taken out by teacher C before teachers A and B got there. And when they did arrive, they assumed that teacher C was the shooter and began firing.

The whole point is, and stonekettle does the same, is that you just cannot tell immediately who the bad guys really are.