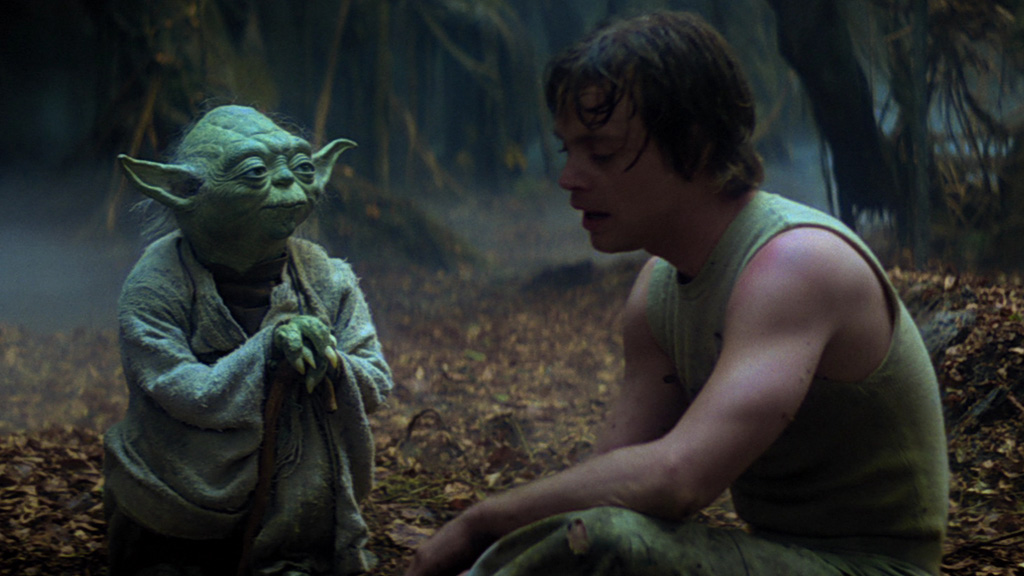 Luke: “Master Yoda, moving rocks around is one thing, this – this is totally different!”

Yoda: “No! NO different. Only different in your mind. You must un-learn what you have learned”

I had always cringed at that Yoda quote whenever I heard it given in ernest as actual advice. “There is no try” is, as a general philosophy, horrible. It has come to mean that you need to believe in yourself or have self-confidence or something like that to those who offer it to you as words to live by. But trying something, to me, is far more an important and rewarding a thing than doing something with false confidence in your ability to do it.

To me, when someone is ‘trying’ something, it is, by definition, new to them. One does not “try” something they are already familiar with. I am an interactive designer and web developer. I can’t give Photoshop or Computers or Dreamweaver a “try”. Beckham can’t give Soccer a “try”, Brad Pitt can’t give Movie acting a “try”. Use your own profession or hobby as an example. Imaging you going in to work tomorrow and saying you’re going to give the profession you’ve been working at for years “a try” today. You’d sound like an idiot, or at least a bit facetious.

And this is where the dual-nature of the advice shows itself: when it comes to new experiences, when it comes to learning new things, exploring new hobbies, professions, talents, etc. you HAVE to try. Trying it is the only option available to you. You can’t “do” guitar-playing if you have never picked up a guitar in your life. You have to TRY the guitar, learn, grow, fail, try some more, and eventually you will learn to “do” it. So as a general philosophy of life, “There is no try” is the antithesis of learning, exploration, growing, developing, and the worst thing you can tell your student.

Whenever this advice is offered (to me, at least), it is out of context of the situation in which it was given in the movie. In the scene, Luke had been training and developing his abilities to use the force to move things. He had gotten good enough to move rocks, boulders, even astromech droids. If asked by Yoda to use it to move a pebble, Luke’s answer of “Okay, I’ll give it a try” would have seemed glib and smart-alecky, to say the least. As snarky as Hendrix picking up a guitar and saying “Let’s see if I can manage to get a little tune out of this thing for ya”.

So when Yoda tells him NOT to try, he isn’t admonishing him for wanting to do something new and strange, he was reminding him that lifting the ship out of the water with the force would NOT BE A NEW THING FOR HIM. Luke wouldn’t have to “try” to move the ship any more than Hendrix would have to “try” to play the guitar. He already knew how to do it, but Luke had to be taught that fact.

So, as an approach to life and learning, “there is no try” is horrible advice. But to Luke, in that specific scenario, it was the best advice he could’ve gotten.