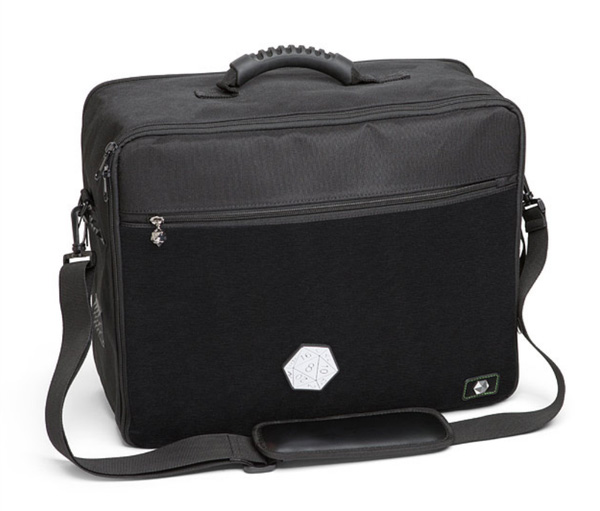 Thought I’d start my Taking Inventory series with something I always like to have with me: my (current) Bag of Holding from Think Geek. Oddly enough, they don’t sell these anymore, as I discovered when I thought it’d be nice to link to it on their store, only to find they no longer offer them. But, I can certainly tell you that I remember getting this bag for $15 as a replacement for its predecessor and have been impressed with how well it holds up.

It has a velcro surface on the front where you can put velcro patches (as pictured). I don’t have any patches, so it currently only sports the D20 patch it came with (in reference to D&D, where the bag get’s its name).

Other than that, it’s your standard messenger bag, mostly: has 2 main compartments big enough for books or laptops or what have you, but its main feature is that you can carry it as either a messenger bag or a backpack.

I almost never do that, however, since all the pouches and sleeves inside the bag compartments tend to dump their contents into the inside of the bag when carried as a backpack (a.k.a. sideways). You don’t lose anything, but you have to do some reorganizing afterwards.

Speaking of which, lets see what I’m lugging around in this thing.

My wife got this for me years ago. I kinda like it, and found its many adapter cable heads more handy than the fact that you can solar charge the pack itself. according to the review site I found for this thing, looks like I still have everything it came with. I’m not sure how much my wife paid for it, but I think it was around $40 or so.

I’d forgotten that the little screwdriver keyring thing was also a bottle opener. That thing used to live in our bathroom after one of our shower knobs got stripped out and we had to keep re-tightening it to turn the water on and off for a while.

I remember getting the carabiner badge reel back when I worked downtown at SunTrust. I think it came in a pack of three or something. Pretty sure I either gave away the other ones, or they broke on me.

And I remember getting that card from the guy from Adobe when they were giving a presentation to the UX dept at SunTrust to show us the wonders of their brand new product “Adobe XD”. A product we use at my current job quite a bit. Funny how something like a business card can remind you that even software you’ve used for years actually had to start somewhere, and you were there for the PowerPoint pitch!

Makes me wonder if the first PowerPoint presentation was about PowerPoint…

ANYway, that’s the front pocket. Let’s see what the front compartment holds for us.

One thing I just know I’m going to be finding a lot of while going thru everything I own is the shockingly high number of cool notebooks and sketchbooks and binders that are either completely blank, or have a grand total of, like, three pages used. I love the looks of notebooks, and always feel like I’m ruining them by writing in them. Need to get over that.

This one is one I got from my current job at Impact Partnership. I’ve really enjoyed working here, and they are a fun and inspiring bunch.

Heh, I remember someone at SunTrust giving these out. Must’ve been during the Super Bowl that year. 2017-18, methinks?

So a while back I had found an interesting book called “How to cheat at everything”. Sort of a gigantic memoir of a con artist that went thru every con you could conceive of: from cheating at cards to dice, carny games, bar bets, how mail fraud works, how lottery scams work, the pigeon drop, change raising, 3 card monty, and on and on. It inspired me to buy a bunch of decks of cards to try my hand at learning shuffling techniques and deck marking.

Never actually got around to any of the “cheater” stuff, but did end up with plenty of decks of cards, so there’s that.

As you can see, the pencil pouch is my little first aide kit. probably need to replace the moist towlette, as I doubt it is still “moist”. Probably going to want more than one band-aid too…

So, as you can probably guess from the fact that I am carrying a bag from Think Geek called a “Bag of Holding” that I happen to play D&D. This folder has stuff from my current (been on hiatus for months, so.. ?) 5th edition game and my stuff from a 3rd edition game I was involved in a year or two ago. Our DM (Dungeon Master for those unfamiliar) from that game ended up moving out of state, and we sort of gave up trying to reignite that campaign. As for the current(?) game, we’ve been on break ever since two of our party had a baby.

Not sure I needed to clarify that.

This item should also have my checkbook in it too, but I took it out and put it on the piano next to the front door ever since I got a landscaper. Since I pay all my bills save for that thru a banking app, no need to really have ready access to the checkbook anymore.

I do find it funny that I had this with me to renew my drivers license and thought the passport was going to be enough proof of my identity.

Heh, oh past me, you sweet summer child you.

Nowadays, you need proof of citizenship, proof of residence, proof of employment, etc. etc. Hence the W-2 slip. Sheesh. I had to go back to the DMV twice that time to get my license renewed because of all that.

If you didn’t already know I played D&D from the folder, the first pocket contents illustrate that quite well, methinks.

Also, I also like to watch Modern Rogue. I met Brian Brushwood when I went to one of the Amazing Meetings in Vegas and have been trying to catch up on some of the stuff he’s been up to. One of those things is learning about lockpicking, which I haven’t tried yet, but was curious enough to make these lockpicks out of some paperclips.

The left-handed ballpoint pen was a neat little item we found at Disney World, of all places. Amanda and I go down to WDW quite often, and one time while shopping around Disney Springs, we spotted a little Left-handed kiosk that had all manner of stuff that would make Ned Flanders proud. We picked that item up along with a few other cute nick knacks, so be on the lookout for them when I get to inventorying the kitchen.

Okay, on to the last section: the back compartment

Inventory of messenger bag: back compartment

Got this at SunTrust and actually *GASP* used it! There are actual notes in an actual notebook! Look like project and meeting stuff from my time at SunTrust. Also noticed interview notes for when I got to interview a couple Voice Actors from Red Dead Redemption 2, so that’s nice.

so, we go to MomoCon a lot,my wife and I. Last year, we even volunteered there and hosted a couple panels: we both did a Zelda panel, I got to interview the RDR2 peeps (see notebook above) and she… well she got to interview (and piss off) the current voice of Donald Duck!

You would not believe how much of a sour curmudgeon that guy was.

ANYway, MomoCon is at the Georgia World Congress Center, and while they were there, this company called Fuel-Rod set up these kiosks all over the place that let you purchase a kit (see above) for having a phone charger with you AND allow you to swap out spent ones for freshly charged ones at the kiosks.

Well, we discovered that the kiosk we tried to switch out the charger on was jammed, but I managed to get it Un-jammed and *POP* out come two more chargers out of the thing. So, I had that going for me, which was nice.

This is technically my wife’s iPad. We got it for her so she can take notes and other things while on the go doing video game journalism when at Conventions. Her iPhone is doing that job now, as she has most of the stuff she needs on that, and we used to use the iPad as a cue card reader, but since she switched to doing her videos on her phone, she uses a teleprompter app for that now. Don’t know how or why I ended up with the iPad, now that I think about it…

Saved the best for last: my current laptop was a nice gift from a friend of mine who works in I.T. and happaned to have noticed an unopened, still-had-the-shrinkwrap-on-it Macbook box sitting in the corner of his company’s storeroom. Nobody knew who ordered it, but it was already 5 years old, so he let me pick it up. Fortunately, it is able to run the latest software (Catalina, at the moment) when my last laptop couldn’t make it past El Capitan.

What I like about it the most is that it still has all the plugs in it for HDMI, USB, SATA, and other stuff. If you follow Apple products, you’ll know that their current models only have USB-C ports. So, not only did I get a great replacement Macbook, but didn’t have to pick up a bunch of USB adapters and whatnot.