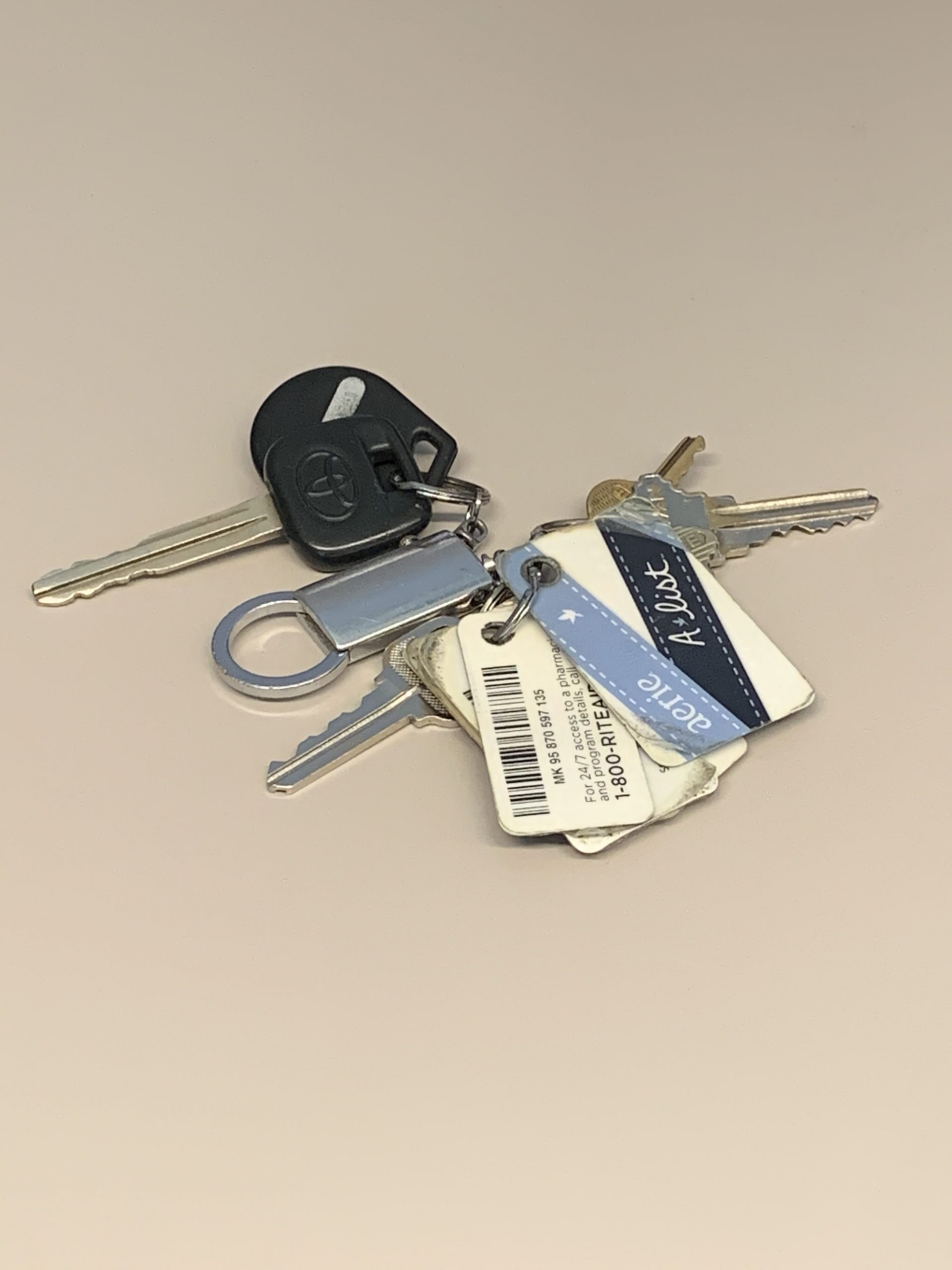 Thought I’d do a smaller one this time as the bag was a LOT of stuff. Still, plenty of stories to tell from a set of keys one carries around literally all day, every day.

This thing is OOOOOOOLD. Like, possibly as far back as college old. I’m almost certain that this predates the millenia. It’s pretty solid for something I’m fairly certain I got from a job fair booth as a piece of swag.

It’s metal, worn smooth of any identifying features, so whatever logo this thing sported is long eroded away. I tried looking up the type of organizer this is online, but didn’t find anything quite like the one I got. Closest thing I saw was something called a spider organizer but mine only has three detachable rings.

This is my car. I’m sure I’ll do an inventory of it sooner or later, so I’ll save the stories for it for another time.

So my building locks out the doors in the stairwells and the elevator from getting to the fourth floor earlier than 7:30 and later than 6:30. I’ve only ever had to use this about 3 times in the year and a half I’ve worked here. I used to have to have a keycard for getting into any building or floor at SunTrust no matter what time of day it was, so it’s nice not to have to do that every time.

First house I’ve ever owned, so my dad helped me with some of the basics, like buying new locks for the doors. Only had to do two outside doors, and we found these ones that let you reset which keys work whenever you like. Apparently good for having people like contractors or house sitters get a key, and you can chenge the lock on them when they’re done. Nifty little feature.

I’ll let you know if I ever use it.

Some, well most, are almost never used. I think Hancock fabrics is out of business, at least in this state. And we don’t go to riteaid anymore since the closest one to us closed and got torn down to make room for a bank, I think. The pet store ones are a bit obsolete since we switched to ordering our cat food directly from Chewy.com

But there is one worthy of note for its absence from my keychain: the Kroger rewards card. I had one, and used the hell out of it, for almost as long as I’ve been out of college. Which means that whatever email or phone number I used to sign up for it is looooooooooooooong gone, and there wasn’t a way to get a replacement without starting a new account, so I used up all the points I had left on it and said adios. Now, we just punch in the one my wife has.

So, I figured, as with all keychains, there’s going to be at least ONE key, one little key that goes to something you cannot figure out. Well, it turns out that I *do* know what that last key goes to.

I just don’t have a clue where that little padlock could be.

I think(?) it was used on luggage for a while, or maybe my old trumpet case.