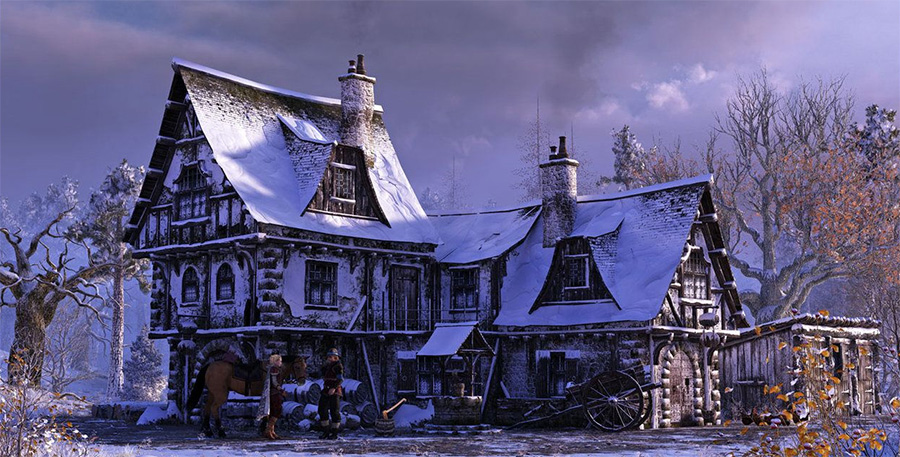 “As much as I enjoy our conversational tangents, we best stick to the plan.” Merrick and Copper had taken a booth off to the side. Not a great view of the stage, but tonight Merrick was more interested in the better view it offered of all the doors. He had been keeping a close eye on the entrances to backstage and behind the bar and kitchen while Copper was watching the main entrance.

“I’m almost positive that they’ll try something tonight.” Copper glanced away from the door to meet Merrick’s eyes, noticing he had switched to speaking Elvish as to avoid eavesdropping. “I hope you don’t take my carefree demeanor to mean I don’t believe you, but I find it daring to launch an attack now, especially with almost the entire company of your companions present.” he answered, switching to Elvish as well.

Merricks brow furrowed in thought. “Probably not a full-on attack, perhaps just a show of force. Or merely disrupting the celebrations, just to show they can.” Just then, Leon appears on stage and begins Pix’s introduction. “How are things looking?“

Copper gives an exasperated sigh “Nothing very unusual to my mind. A few people getting too drunk for this early in the evening. The only thing slightly out of place would be that invisible halfling standing next to the door.”

He stays motionless for a moment, then slowly and deliberately places the mug down, carefully wipes his mouth with a cloth, slowly places the cloth back in his lap, smoothing it out until ever-so-politely and quietly turning to Copper.

“Oh, he’s not doing anything, just been standing near the entrance for about 10 minutes now. Hasn’t moved much, but neither would I if I were an invisible halfling. Liable to get trampled by you clumsy humans at the best of times, nevermind when they cannot see you.”

Merrick slaps his face and draws his hand down in a painfully slow motion.

“Well, at least he hasn’t moved.” Merrick’s mind starts racing: going thru the possibilities. Chances are he isn’t here for violence, but rather recon. That gives him an idea.

“Do me a favor, *Message* me if I can get him to follow me.” As Leon’s introduction begins to wrap up, Merrick makes his way along the side of the room towards the front entrance as Pix takes the stage. Once near the front, he hears Copper in his mind:

Just before the first notes begin, Merrick makes an exaggerated whisper to one of the staff.

“Hey, have Leon come meet me at the stable when he can, that special delivery of Al’s is here and… you know what? Nevermind, I’ll take care of it.” Merrick makes sure to mumble under his breath to the empty space that conceals the invisible figure “The fewer people know about it, the better.”

*Oooh, whatever you said got his attention, my lad!* Copper sends with a knowing chuckle.

He’s about to head back when Pix starts her show. Everyone is transfixed for the first few bars and Merrick almost instinctively whistles at the part where the cloak is thrown off. He shakes himself out of it right when Pix begins moving into the audience. He can’t get caught up now, and begins heading out to the stable: making a mental note to extract a bit of revenge on this interloper for making him miss this.

*is he still following?* Merrick sends to Copper. Hoping a certain bit of equipment back behind the stable is still the way he left it a few hours ago.

*Well, he’s picking his way towards you, but he’s having a time what with not wanting to bump into people. But yes, he’s still intent on following you. Want me to keep line of sight?*

*if it means getting up, no. Stay there. I got an idea.* As Merrick opens the door to the loading dock in the back of the stables, he spies a pile of fresh sawdust, grabs it and leaves the door crack enough for a halfling to slip thru without touching it. He want’s him coming this way. just inside the door, he looks up and smiles a mischievous grin. “Just how I left it.”

He hurriedly spreads the sawdust in a spot directly past the door and stand on the first step of the landing beyond with his back to the door, keeping his eyes fixed on the sawdust patch.

Pix’s singing begins to spill out from the open door of the Dragon as the chorus hits. As Merrick waits, the hidden halfling approaches, instinctively timing his footfalls with the beat of the music to avoid detection.

As the halfling rounds the corner onto the landing, Merrick spies what he was waiting for: a soft footprint appears on the sawdust behind him. Merrick cannot help but whisper a little something he’s heard Al say on occasion

With that, Merrick releases the rope he’d been holding and a number of sacks of grain, a crate of apples and a small barrel of pitch fall directly on the halfing; just as Pix’s song reaches the line “I found peace in the violence”.

As the last of the debris settles, thunderous applause erupt from the hall as Pix finishes the performance. Merrick feels a little twinge of guilt for having missed it, but is happy none of this has interrupted the celebrations. In a bit of whimsy, he turns to the door and gives a fake-curtsey, as if the applause were for him.

With that, he hurriedly fishes thru the clutter to find a halfling form, Bundled up in winter gear and wearing a bit of cloth over his lower features. Just as he reaches to reveal his face, Copper sends to him:

*Hey, you’ve missed a heluva show, my lad. How are things on your end?*

*had my own show back here, but they’ll hopefully be no encore.*

With that, he forgoes the unmasking and gathers up the small form, throwing him over his shoulder and heading inside the stable.

*Best hurry back, my lad. They’ve broken out the Good Stuff!* Copper sends.

Merrick finishes hastily tying the small, unconscious interloper to a post in the stable and turns to leave. Stopping suddenly, he has a thought. Stooping down, he takes a knife a cuts a lock of hair from where it sticks out of the halfling’s hood, hoping it’s small enough not for him to notice its absence.

With that, he rushes back to the Dragon, composing himself as best he can before walking in just as glasses of Elvish Wine are being passed about. He makes his way to their group of friends as Copper sidles up next to him.

“Shall we say anything?” Copper asks. Merrick takes in the scene of his newfound friends enjoying themselves in a hard-won bit of merriment. Cathing Al’s eye, he gives him an exaggerated smile and wave as the wine glass is offered.

“No” he whispers to Copper. “No need to ruin a good party.”